This past weekend was the KY Derby Marathon. Since it's so close I didn't exactly plan... anything... per say. So that led to a quick facebook "Who's going to be in Louisville and wants to entertain me" post. Luckily I have quite the slew of crazy running buddies, which not only make me feel relatively normal with my running but are available for a relaxing pre-race dinner and early bed time. Right? ... Errrrr.... 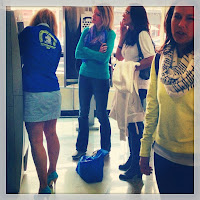 How does one start a marathon weekend? Assisting in a felony, joining a bachelor party, and taking shots, naturally! We headed over to the expo and found Shannon having some ATM trouble. Solution? Try to retrieve the card using tweezers. NBD. After raiding candy from every vendor at the expo (more on the expo in the race ratings tomorrow) we headed to Marathon Maniac, Abbi's house to catch up with more maniacs... and start drinking. If you know anything about Kentucky Bourbon Barrel Ale #KBBA, you know you can't have just one. You also know that you should never have more than one! 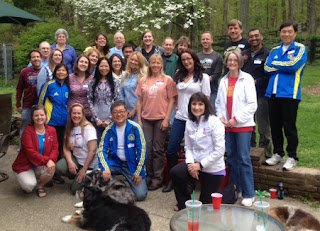 A few beers later we found our table being invaded by a bachelor party who offered to buy us shots. Everybody knows white gummy bear shots are the secret weapon to marathon running! Right? No? Hmmm well now you know! It was also a great time to catch up on all the Marathon Maniac drama! Wow if you ever doubted the affect of pheromones in marathon running, you should just hangout with the maniacs for a bit. A bit of booze, chatting, and a little hottie-runner-facebook-stalking/friending... and I'd call that a successful pre-race evening. Wait, what? Yeah, don't worry about that last part.

Race Morning!
The hotel we stayed in had an Einstein Bagel in the lobby. We bageled up, got some coffee and headed to the race! No I wasn't hungover- I'm an expert in pre-race drinking. Dave picked up awesome 'We Run for Boston' shirts for all of the girls that Fellow Flowers is selling and sending all proceeds to One Boston Fund. Not only do the shirts support a great cause and feel great (sweat wick), they are also quite eye-catching. Everybody from spectators to runners commented on them throughout the race. Go buy one! 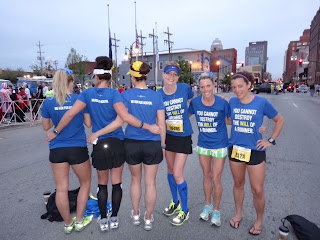 The group got a little split up at the start, but Heather, Shannon and I started running together. We committed to starting around an 8:30 pace and seeing where it went from there. 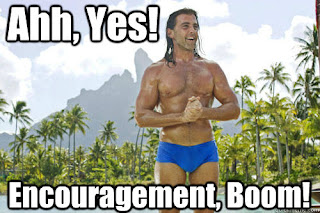 We found Kim right before we went into the "hilly" portion of the race which included a series of sharp uphills with equally fun downhills. The roller coaster took a lot out of us but that's what running buddies are for-- when your body has quite and your head is faltering, they give you encouragement... boom. I've actually never ran hard with anybody in a full race before... especially other women. I was very pleasantly surprised to find that we all worked together so well. If somebody had to go ahead or fall behind everybody understood. We also each took a turn pushing the others when we were individually feeling good.

In the end we all ended up completing the races exactly how we wanted... and we added TWO more members to the Maniacs. Welcome to Kim and Nicole!!! Oh and then we drank some more! 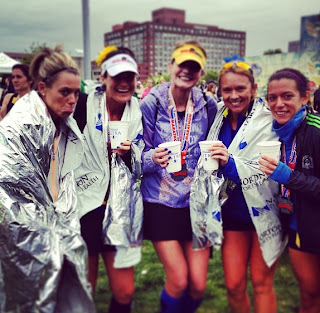 Post-Race and Chub Rub!
You may have noticed the "My Fitness Pal" widget (feel free to friend me) in the top right corner of the blog that is tracking "lbs lost." I've gained a couple of pounds since I was in my racing prime. Nothing drastic but I was feeling a bit heavy while running, so I decided to lose about 8 in total. 2 down so far, but I was very surprised to get a new running "experience" after all these years... CHUB RUB.

I've never been one to need or use "glide" or other products to help with unwanted friction. Oh my dear Lord... the pain! I couldn't cross my legs and even in a dress I was burning. Let's not even discuss the post-race shower situation (I'll be having nightmares for years). I ended up picking up some Desitin. Yes, what you put on babies butts for rashes! If that isn't encouragement (boom) to lose the last few pounds I don't know what is! I'm never going to a race without my emergency Desitin again! Hey- maybe they will sponsor me. :)

Well... at least I'm not a guy! There are SOME things I don't have to worry about... haha suckers!!! Sorry John! 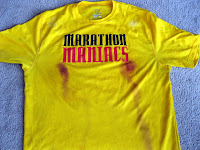 What now? More hills!
Two days later and I am freaking SORE! It has been a long while since I've really felt sore after a race, which means I really pushed myself this weekend. My quads don't seem to want to support my body and with each step I picture myself looking somewhat like a high-stepping pony.... with high heels. Awkward? Yes, very.

I've been training a friend to complete his first half marathon. That half marathon just so happens to be the Flying Pig. If you know anything about the race, the hills on both the half and full course can be brutal. So we're going out tomorrow morning to run the hilliest section. This is gonna hurt, but it's the best thing to do while beating my body back into submission! It will also get me ready for the next race. Up next: The Flying Pig Marathon THIS weekend! Woohoo.

Who's Running the Flying Pig???

Off to take on the Cincinnati hills! Wish me luck.
-Stephanie

Posted by Stephanie Nichole at 5:00 AM