I know I promised to do the race rating today, but I've posted about nothing but the Derby Marathon so far. If you're saying "NO! I want to see MORE of the Derby Marathon!" well you're in lucky my friend. After this weekend we have about 1000 photos- this is what happens when you have 6 people with cameras. Shannon was kind enough to pull the best of them and put it to some music. Check it out: Video!

The rating will be up tomorrow, however, in the meantime let's talk about training... Marathon Maniac Style! 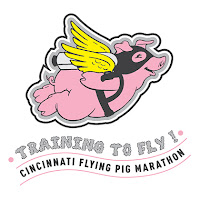 Yesterday was a hill day. Not just any hill day- it was the flying pig marathon hill day. I took a newbie half-marathoner-in-training (Chris A.) on the flying pig half course so he could get ready for the race this weekend.

How did it feel? The first few steps were a little tough but the legs got into it eventually. Normally Chris does around a 10 min/mile pace and that's with no hills. I expected yesterday to be par for the course but I was wrong. He decided to show up a little hyper, pulling a buddy the elf and pointing out every single thing he saw on the course "oooh look a castle! A bunny! A homeless man!"

If you know anything about the pig course we were in Eden Park. This is the section that keeps banking and going uphill right when you think the current hill your on is about to stop. We had a surprisingly good pace going up and then it was time to go down. Downhill running is killer on the quads when they're already sore. Chris seemed to be enjoying himself. I had stopped listening to him a mile before but suddenly I hear him say to himself "I LOVE this downhill... I wanna make LOVE to this downhill." Annnnd that is how Chris got prohibited from eating chocolate chip pancakes before our runs ever again.

So why did I run hills when I'm still a bit sore from this past weekend's marathon? It's how you have to train if you want to get faster! Read on my little chick-a-dees...

Training between Marathons
If you followed my 50-state marathon blog you may already know this but I honestly believe (and have proven) that you can get faster while running many marathons! The key is treating each week like you didn't just race. Let me explain further....

Day After Marathon: Complete your Monday (or Sunday) runs as if the marathons was just another long training run. In fact, treat your whole week as if it's just part of a normal training week. Get in your speed work and hills and tempo runs. Is it going to hurt? Uhh... duh! More than usual? Yeah- probably! Get over it! Nobody said (maniacal) marathon running was gonna tickle! Now the exception are hard race weeks (or injury)...

Race Weeks (the mini taper): If I'm coming up on a race that I'm hoping to run pretty hard at (which is not ALL of them) I'll do a mini taper throughout the week before. I'll keep my speedwork to Monday or skip it all together and I'll limit the hill training to keep my legs fresh(er). How do I pick which marathons to race? Well it depends on my goal for that particular race. Some marathons just can't be run fast (high elevation, extremely challenging courses, trails, pacing others, etc) and I can write those off as training runs.

Racing: I also like to pick 1 or 2 marathons per season to be "race" marathons... during these I'll try and go for a PR or fast time (for my current condition). Why 1 or 2 per season? S**T HAPPENS! You could wake up to bad weather, bad mood, bad body aches, or even a bad hangover! You can't control everything and some  days just aren't your day. I've seen marathoners put so much pressure on themselves to hit a PR at a particular race that they have been training for and they ignore these challenges and still try to push the race, usually leading to disappointment.

Strength Training: I'm a HUGE supporter of strength training. I can do a longer post on this but it needs to be done and can add a ton of speed and prevent injury. I personally like, walking lunges, 1-leg squats, and anything that really works the tiny support muscles that we rely on so heavily at the end of marathons. Using any kind of balance ball can be a huge help with these! Luckily I have a few posts on my old blog on strength training tips: Weekly Strength Training and Strength Training for Knees

Much much more to come in these adventures. Today's run is going to involve a little speed session as I make my way back to Yasso's!!! I'll let you know how those go tomorrow. Wish me luck!

-Stephanie
"Run to Win" -Meb
Posted by Stephanie Nichole at 5:00 AM