This past weekend was The Flying Pig Marathon and my 80th marathon to date! Luckily for me, it's in Cincinnati! This year it was even bigger and better than ever. Some cities have festivals and events that they build a marathon around. In Cincinnati, we have a marathon that we build quite the event around. The expo is huge, there is a pre race(s) festival and the entire city really gets into it. Which includes....
My fantastic squeal team! Christine (far left) ran the half, and my 3 friends came and waited in the rain, dressed up like little biggies, cheering, and texting me encouragement! I, on the other hand, texted them selfies of me doing impressions of animals running a marathon. Normal? mmmm... sure. 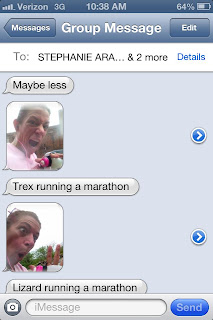 This was my first back to back marathon weekends in a while! It went surprisingly very well. I ran the first 9.5 with a friend at a bit of a slower pace (~10.45), then took off for the remainder of the marathon, finishing  with a 4:12:42 chip time. It was fun to do negative splits and play the passing game.

MB came to run too! She ran a 5:08 and appeared to have quite the fun time! We were having a beer (celebrating a little Cinco de Mayo) when we saw this strolling up...
A few lessons learned from this marathon...
(because even 80x marathon runners have lessons to learn!)
~Running skirts DO stop the chub rub!!!! Ok... I'll admit, they don't actually look that bad either :)
~I've been running 100% over pronated and bought new shoes-- which makes the ankles very weak. Even when changing to a better form, it's important to build up those stability muscles.
~When purposely holding back to do negative splits, it's easy to get caught up in the start of the second split. It's important to hold back a bit and not burn it all.
~Playing "tough guy" and doing a Century Workout the few days before will STILL hurt if you did exercises you're not used to... stupid. My abs still hurt from the 100 V-Ups. Apparently somebody needs to work on their core!

It was a fun race and always a great time seeing old running buddies from all over the city (and beyond). More to come with the race ratings :)

-Stephanie
"Run to Win" -Meb
Posted by Stephanie Nichole at 5:30 AM