If you followed me on Steph's 50 Marathon Challenge you will be very familiar with my "Race Ratings"-- a full, detailed, review of every aspect of each marathon. I'm eventually going to consolidate the race ratings to one place, but this if the first official one of the new blog! Hopefully more to come-- well at the very least 21 more to go to 100! Enjoy...


Tagline: "A simple KY marathon with a lot of energy" 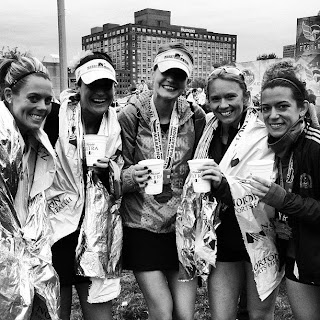 Overall Race Rating: 4.0/5
Average Calculated Race Rating: 3.8
~I really enjoyed this race. It was full of energy from runners to spectators to volunteers. The course was tricky at points but it was still fun and running on Churchill Downs was something different. The swag is fantastic and the location ideal for a race in the area. There is plenty to do and everything is easy to get to. Big props to making more small shirts when the ran out. Overall I'm a fan!
Let's Play Race Director...
~What I would change would focus on the organization a little. There needs to be slightly better signage pre and post race so you could find what you needed (especially to bag check). The mile markers were a little off at points so that could be tightened up. I would also find a way to tie the locals/festival in with the race a bit more. If there was a festival post-race I didn't know about it.

Event Organization: 4.2/5.0 (As far as event organization, this will include things like host hotel, website use, ease of travel to the event and to the actual race itself, etc)
Distance from Airport: 5.6 Miles from SDF
Rental Car Required: Mostly likely not! There are a slew of hotels in the downtown area (walking distance to  the start) and many of the hotels have some sort of shuttle option. Typical parking fees at hotels are around $10/night ($20 if you valet).
~The location is ideal with the start being so close to all the hotels which is close to the airport. Hotel prices may be a bit higher than usual due to Derby week and all the festivals going on, but you could still get a decent price.The website is pretty well run and updated. There is also plenty to do around the area. 4th street is the place to stay if you want to be close to food... and beverates...

All information, course maps and elevation, is provided and information is sent virtually every day leading up to the race.The Galt House is the hotel hotel for the marathon. I didn't stay there this weekend but I have stayed there before and it's very nice. There was special pricing for runners but that wasn't released on the website. We were able to book a hotel room the day before the race so selling out isn't a huge issue.

Extras: There were no free massage tables and the post-race party was kind of spaced out without much indication of where anything was. I also would have liked to have some tie-in with the actual Derby. Yes we ran on the track for a bit, but that was pretty much it. I didn't feel like the event was really part of a festival.


Race Organization: 3.9/5.0
Hydration (color and type): Red powerade as well as water. Water was every other mile and powerade was about the same. Bonus: cups are eco-friendly with no wax, but they still don't disolve!
GEL type/flavor/availability: Strawberry and Banana powerbar gel (gag) available 3 (maybe 4?) times on the course. Ok this actually wasn't that bad- I'm just a pure vanilla GU kinda girl. I did successfully choke one of these down when I ran out of GU.
Post Race Food: Pretty standard here- bananas, chips, pretzels... oh and free beer. It was supposed to be ticketed one per person, but they weren't even bothering with the tickets.
~Overall I think the organization was pretty well done. Water stops were put in areas with plenty of room for runners to squeeze in and not trip over each other. There were plenty of port-a-johns along the way which was great. The water availability was fantastic. The only downsides I would say are the bag check locations and the mile markers. The bag check at the start was ALL the way behind the last corral and there were no signs telling you where it was. The mile markers were off in a couple of point in the middle (a few hundredths of a mile). There were a ton of port-a-johns at the start as well!

Course: 3.7/5.0
Marathon Guide Rating: 4/5
Garmin Distance: 26.28 ~ There were a ton of turns in the beginning of the race and with all the halfies it made it very difficult to stay on the tangents.
Elevation Gain/Loss: 331.36 climb

~Oh that little guy? Don't worry about that little guy.... ok do because it takes a lot out of you. The hill in the middle is actually a series of very share uphills with shorter, flatter downhills. It's killer on the quads and hams, but if you're a hill runner (like Heather Z) you're all set. You definitely come out of there feeling like you lost a little something. That hill around mile 23 is pretty rough as well. I hear that the course
used to be FAR worse but this was a little challenging. The good news is that it sticks to the 2 rough points to mentally it's a little easier to get through than some other courses. The first couple of miles have a lot of turns. Keep a close eye on your tangents and get ahead of the pack of halfies if possible or you'll be wasting extra mileage. The roads are very wide and there is only a small section of out and back, so you get the whole road for most of the trip. After the fulls split off you have all the room you could possibly need. I should note, you get to run on Churchill Downs- Giddyup!

Spectators: 3.0/5
~Spectators were pretty good. I was surprised they weren't out more as this is an event that is part of the overall Derby Festival. They were set at some key areas, but none could get in and out of the really hill climb section, as it's part of this windy park. None of the spectators had any extra goodies or anything :(

Pace Groups: NA/5
~I know there WERE pace groups (ASICS) that ran from 3:10 to 5:45, but I cannot recall seeing a single one. There weren't a lot of out and back points for opportunity to see many and we stayed within a 10 sec/mile window the whole time so we could have been between groups.

Runner/Corrals: 4.7/5
~Corrals: These were pretty open, but assigned. I don't think anybody checked the bibs so it was kind of a free for all. Surprisingly people seemed to stick to their areas better than I've seen in a while. I didn't feel like we were tripping over people.
~Runners: I don't know if it was just my group or post-Boston Marathon event, or a mix but it felt like there was a lot more solidarity than usual. People said good job to each other, they chatted a lot more (even just a few sentences). It was a very support-filled group and I was happy to see that! 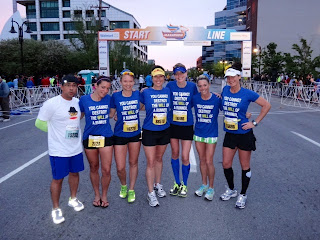 Expo: 3.2/5
Hmmm I would say a pretty basic expo- nothing crazy, but a lot of other races advertising. There was, however, an absurd amount of candy... which we took full advantage of because we were starving. You could pick up any extras that you needed/were missing- GU, water bottles, etc. 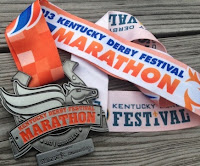 ~T-Shirts: Apparently they ran out of womens' small shirts BUT instead of just sticking us with mediums they actually went out, bought new shirts, and had them printed. Granted, the color (BRIGHT yellow) was a little off from the original (a muted yellow) but I was impressed that they had extras printed and who would ever know?? The fit is nice and cut for a woman (yay!). 4.2

~Medals: I liked the medals. They pulled in the horse racing side of the festival and had a nice lanyard. 3.9
~Goodies/Others: You were also given a pretty nice running hat with the marathon logo- surprisingly not at all dorky! The goody bag didn't have anything great, BUT there was kind of a cool feature- a virtual goody bag!You could print off and connect to free offers. There was a free admission to Churhill Downs as well as discounts on compression socks, watches, running sunglasses. What a GREAT idea... and so much greener!

That's it! If you get a chance to run this race... I absolutely recommend it.

-Stephanie
"Run to Win" -Meb
Posted by Stephanie Nichole at 10:09 AM